skip to main | skip to sidebar

I was never one of those kids who was ever able to get a faraway look in his eye and say, "I want to be a...dentist when I grow up." There was a stretch in high school when I was sure I wanted to be a Secret Service agent, but then I got older, had sex, learned about the political process, and decided that perhaps my life was more important than some Presidents' after all.

So, lacking any direction from myself, I've let my career drift down whatever path fate (or laziness) wanted to take it. Eventually, I became an office manager--excuse me, Overlord--and cashed in little pieces of my soul on a daily basis in exchange for mediocre compensation and the ability to sleepwalk through most of my duties.

Not exactly the American Dream, is it?

So I've been thinking about a career change for a while, for this and other reasons I'll maybe write about another time. The problem is, how do I apply my past experience to a new career? If I really want to strike out in a new direction, how can I do so without sacrificing the decade or so of experience that I've gathered to this point? How do I admit that those years were, essentially, a waste of time as far as my career's concerned?

Then I took a look at my resume. I've worked for four companies since college. Here's where they are now:

Company One: Expanding as I joined. Began to shrink shortly thereafter Moved into a massive new company headquarters built in large part just for them; when we did so, our 20-person department was the only one on an entire floor designed to accommodate hundreds. Eventually broke apart and was bought out. Fortunately, by then I had left for...

Company Two: An energetic young consulting company started by a good friend. I was the third employee in; at our height, we were up to three times that number, and moved into a custom-built-out space to house our growing numbers. A year later, I was the third-to-last employee laid off as we spiraled down and out of business. After an ill-fated attempt to follow in my Dad's footsteps, I answered an ad in the paper that led me to...

Company Three: A promising, publicly-traded company with scads of cash on hand--no worries about bankruptcy here! Except that we had no source of income. Apparently, this is a problem. This company moved out of its fancy, custom-built space into a smaller, cozier office, then rented a second office in order to expand again. Shortly afterwards, it began to shrink once more. Or possibly expand. It really depended on the CEO's whim that day and whether or not someone was willing to park their car next to his in the garage to keep his from getting scratched. Last I heard, they had moved twice more and were being threatened with de-listing from the stock exchange. But that didn't matter, because I had long since moved on to...

Company Four: A well-meaning but evil family-run business whose financial difficulties began, quite literally, the month after I joined, also the month they moved into their much-anticipated new office. After some ill-advised (but admittedly necessary) dealings with heartless bankers, a loan shark, and (shudder) the federal government, we'll be forcibly parting company next month, along with about a third of the rest of the staff. 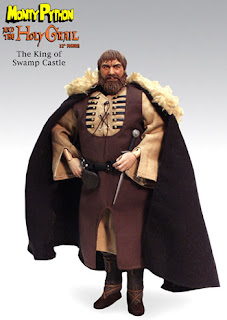 This is the experience I'm concerned about giving up? I'd have more success trying to build a castle in a swamp. Entry-level position in my new career, here I come. Wonder if Ramen still tastes as good as I remember it?
Posted by Office Overlord at 8:11 AM

I was chuckling, until I got to the end...and was a little bewildered. That's a real bummer, Mike...and you were writing this on Christmas eve? sigh. Sorry! Just remember, you're brilliant. And people like you. I'm serious on both counts.

Hmm...the end was supposed to be the funny part. Oops.

Well, you remember the shot in Star Wars of the giant laser in the Death Star being fired? You remember how there were those two guys in the lower left part of the screen, working merrily away without benefit of railing or other OSHA-approved safety devices (as parodied in Family Guy)?

I don't know those guys, but I'm going to pretend I do by calling them "Frank" and "Bob". I presume that Frank and Bob are normal, everyday guys who talk about sports and how their enormous helmets make them top-heavier than Charo, who go out for a Jawa Juice after work, and who worry about having enough credits for retirement. Might even help an old three-breasted alien (yes, I'm mixing sci-fi) across the street if the opportunity presented itself. Nice guys, right? But the fact remains that their job is to do something important-looking in the background with a laser that blows up planets.

That's what I mean by "well-meaning but evil."

Office Overlord
Either the super mega-ultimate pinnacle in office administration, or an out-of-work office manager trying to figure out what to do with an internet connection while the porn's downloading.